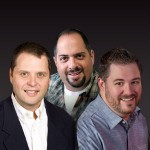 Sean Baligian has been in the business since 1995, when he started his career at WSPD in Toledo. Along with hosting a Sports show, Sean did football and basketball broadcasts for the Rockets. In 1998 he joined WJR on a part time basis, and was able to host a sports show, along with calling CCHA, and GLI hockey games. In 1999 Sean started at WDFN, and hosted the AM, Midday, afternoon, and PM drive shows, along with hosting College football, Lions Post game, and Icetime hockey shows.

In 2011, Sean started doing the afternoon show in Grand Rapids for ESPN 96.1. Sean has provided both play-by-play and Color for the Plymouth Whalers, and High School Hockey and Football for many years, and currently works with USA Hockey, and is in his 7th year as the Voice of Wayne State Football.

A native of New Jersey, Tom grew up listening to and loving radio, especially WABC-FM in New York City. As fate would have it, in ’93 he and his wife Kathy moved to Michigan. It was then that “Maz” decided he wanted to really give radio a try. He enrolled in Specs Howard Broadcasting School and landed an internship at WJR-AM with Mitch Albom. Maz had found his calling, going on to become the go-to sports reporter at the station.

It was Detroit Sports 105.1 FM’s luck when Maz joined our team as Executive Producer and Host. On its first day on the air, Maz helped the station land its first scoop. Maz continues to be a part of breaking many important sports stories for the station.

Three of the reasons that may motivate Maz to be “the nicest broadcaster” in the business are his daughters Lili, Abby and Maddi. His passion for sports and radio are wonderful examples not only for his children but for all of us.

What makes Maz, well, Maz? Perhaps it can be summed up with this insight he shared: “It’s great to be a part of something [Detroit Sports 105.1 FM] so special. I really am living my dream.”

Marc Fellhauer was born in Columbus, Ohio and saw the light at 6 months of age by moving to the state of Michigan.  After growing up in Ann Arbor he graduated from the University of Michigan.  His first radio job was working at an oldies station & sports station in Ann Arbor.

In 1997, he became the producer of the highly successful Drew and Mike Show on WRIF.  After that show ended in 2013, Marc helped launch Detroit Sports 105.1 by coming on afternoons.  In October of 2015 he was moved to middays to Co-host with Sean Baligian and Tom Mazawey.

In his free time he loves being annoyed by his nearly 2 year old daughter  and wife.  Since he is a life-long Detroit Sports team fan, his main goal every day is to get on the couch and watch TV.

Listen Live
...
Live stream will be available after this brief ad from our sponsors
Log In To
Now Playing
Listen Live